All Collections
Preflop Calculator ICMIZER
How to Use the Automatic Hand Analysis in ICMIZER 3?

How to Use the Automatic Hand Analysis in ICMIZER 3?

The automatic analysis feature is one of the most important features of ICMIZER 3. It is available to all ICMIZER subscribers, including Basic and Pro subscriptions. With automatic analysis, ICMIZER quickly looks through all your hands in the tournament, finds suitable ones for analysis, calculates equilibrium ranges, watches how the player played, then shows all the errors and points out the most expensive ones. This feature allows you to find the most controversial and difficult hands, sessions, or tournaments immediately, as well as receive from the training process not only benefit but also a pleasure.

Which hands get analyzed by the automatic analysis feature?

The autoanalysis processes not all hands, but only those which match the specific criteria. Hands must be played at a push/fold stage of the tournament, or happen to be played as if they are in the push/fold stage already. Usually, such hands will involve a lot of folds and some short-stacked players.

The perfect hands for automatic analysis are those where players are limited only to push/fold decisions and have an effective stack equal to 20 big blinds or less. The effective stack is calculated as the second deepest stack among all players who did not openfold - fold as the first player’s action. If the player’s action in the distribution were not a push (or a push call) or a fold, it would not be autoanalyzed.

The goal of the autoanalysis function is to maximize the player’s benefit and minimize the possibility of misleading him. That is why the criteria for the analysis and the verdict about the wrongness or the correctness of the action are quite strict.

How to use the autoanalysis?

1. First of all, you need to open the ICMIZER tournament selector window. 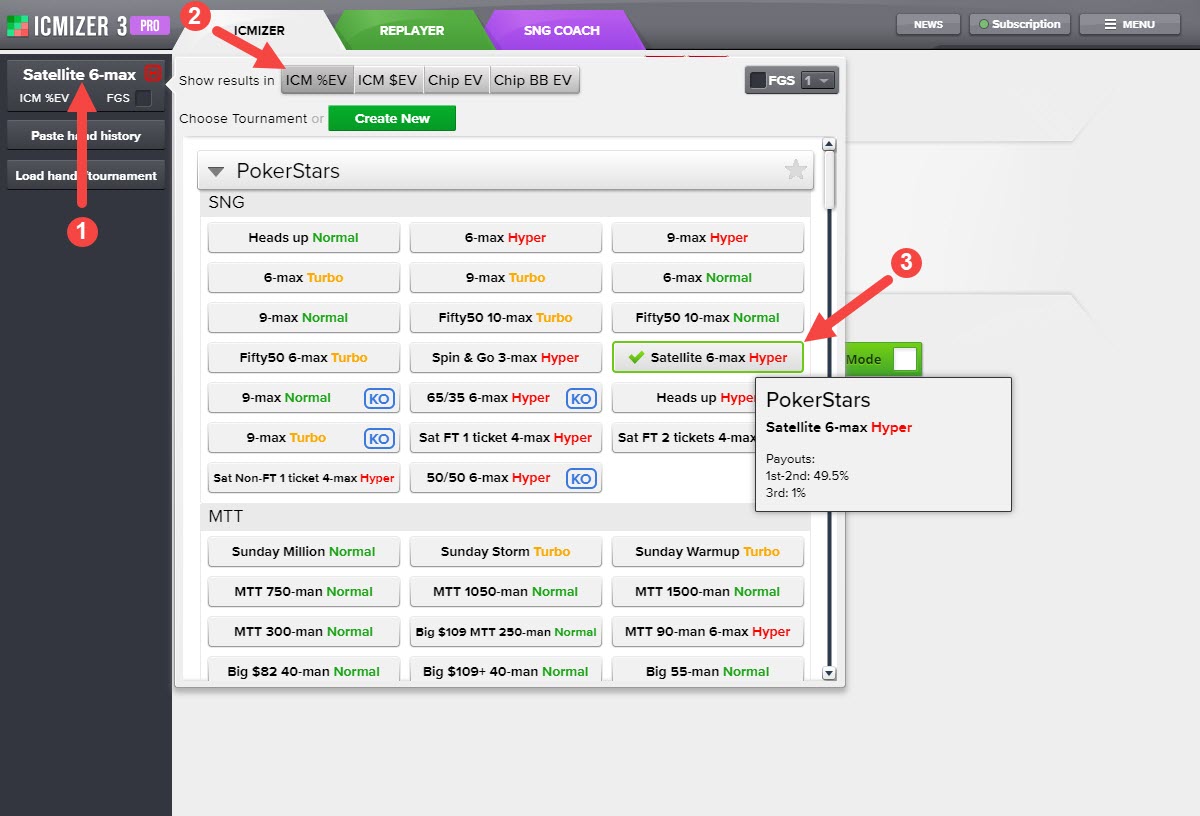 ICM %EV - results are displayed as a percentage of the tournament prize pool.

ICM $EV - results are displayed in dollars. When choosing this mode of calculation, it is necessary to input the prize pool of the tournament in the “Prize Pool” text box.

Chip EV - results are displayed in chips. Chip EV is a simplified calculating mode because when a player folds, his fold equity does not depend on the actions of his opponents and equals the remaining amount of chips in his stack. Choosing a Chip EV mode for any tournaments means that ICMIZER considers everything just in chips as if there are no payments in tournaments, and the game is essentially played in chips.

3. Select from the list the structure of the tournament that you want to figure out using the autoanalysis.

When you are choosing a tournament there, it is essential to correctly select its payout structure and the existence of a bounty (regular tournaments, tournaments with bounties, and progressive bounties). The rest of the data ICMIZER takes from the loaded hand history file (blind levels, number of players at the table, etc.). Other types of data do not affect the calculation of the autoanalysis (such as the growth rate of blinds in the tournament - regular, turbo, hyper, or blinds growth step).

ICMIZER already has a preloaded list of the most popular tournament structures, but if this list does not have the necessary tournament, you need to create it yourself. To do this, click the “Create New” button and enter the required tournament data. 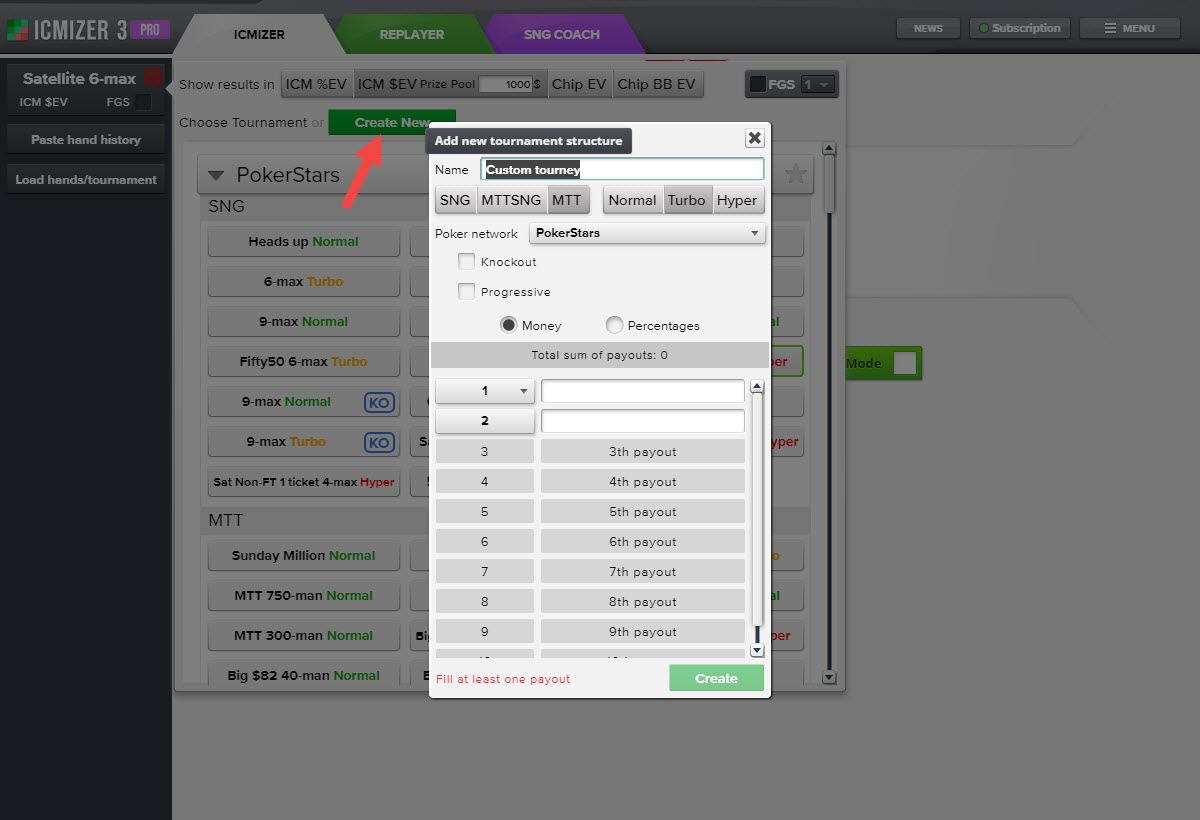 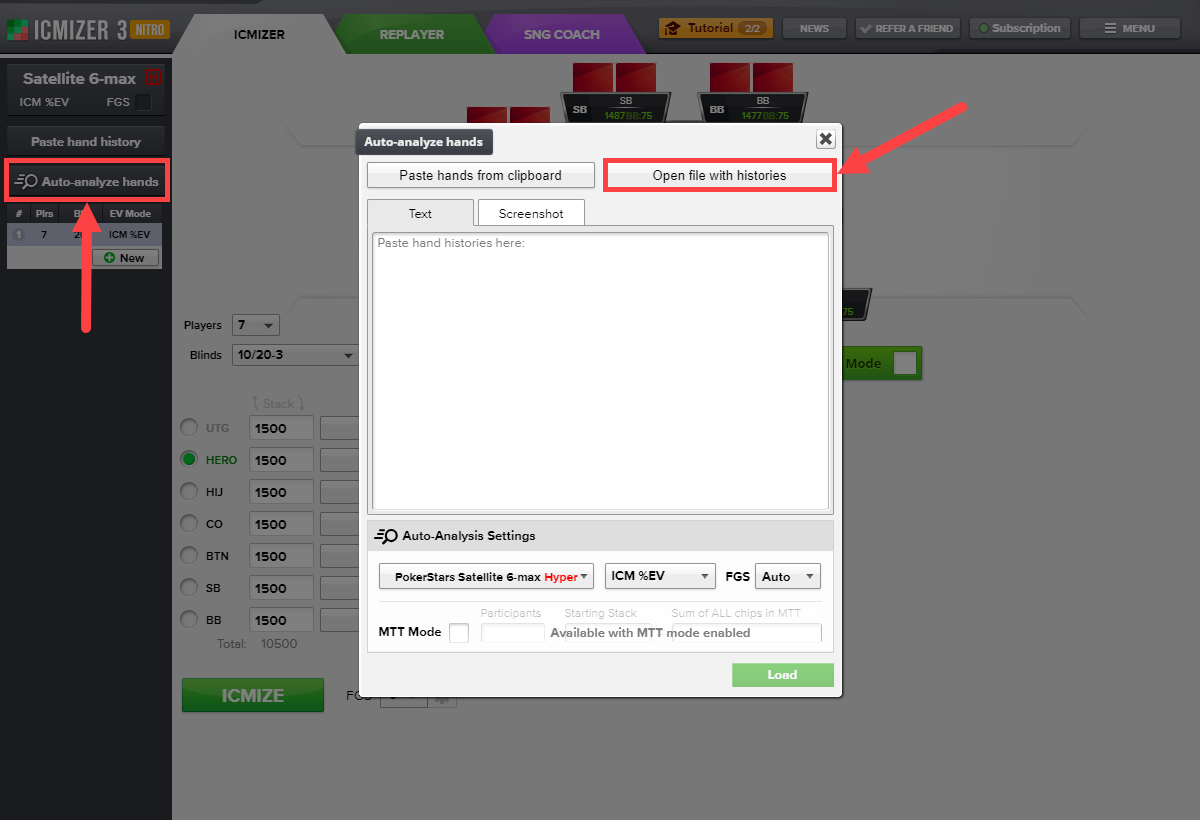 If the loaded tournament is MTT, then it is necessary to check the “MTT Mode” checkbox and input the total number of chips in the tournament in the “Sum of ALL chips in MTT” text box. 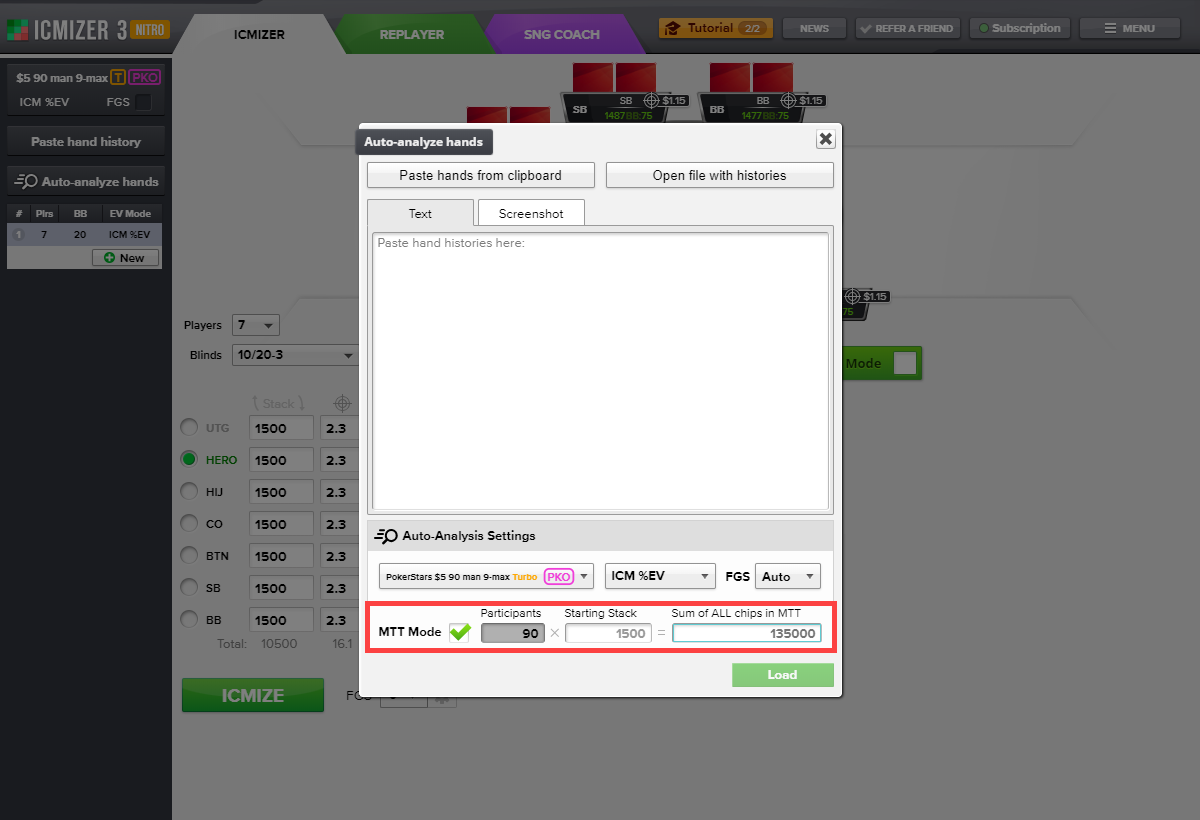 If on the previous step the Chip EV mode was selected, then the MTT mode cannot be activated, because it works only with ICM calculations.

5. ICMIZER calculates how many hands the selected file contains, click the “Load them” button. 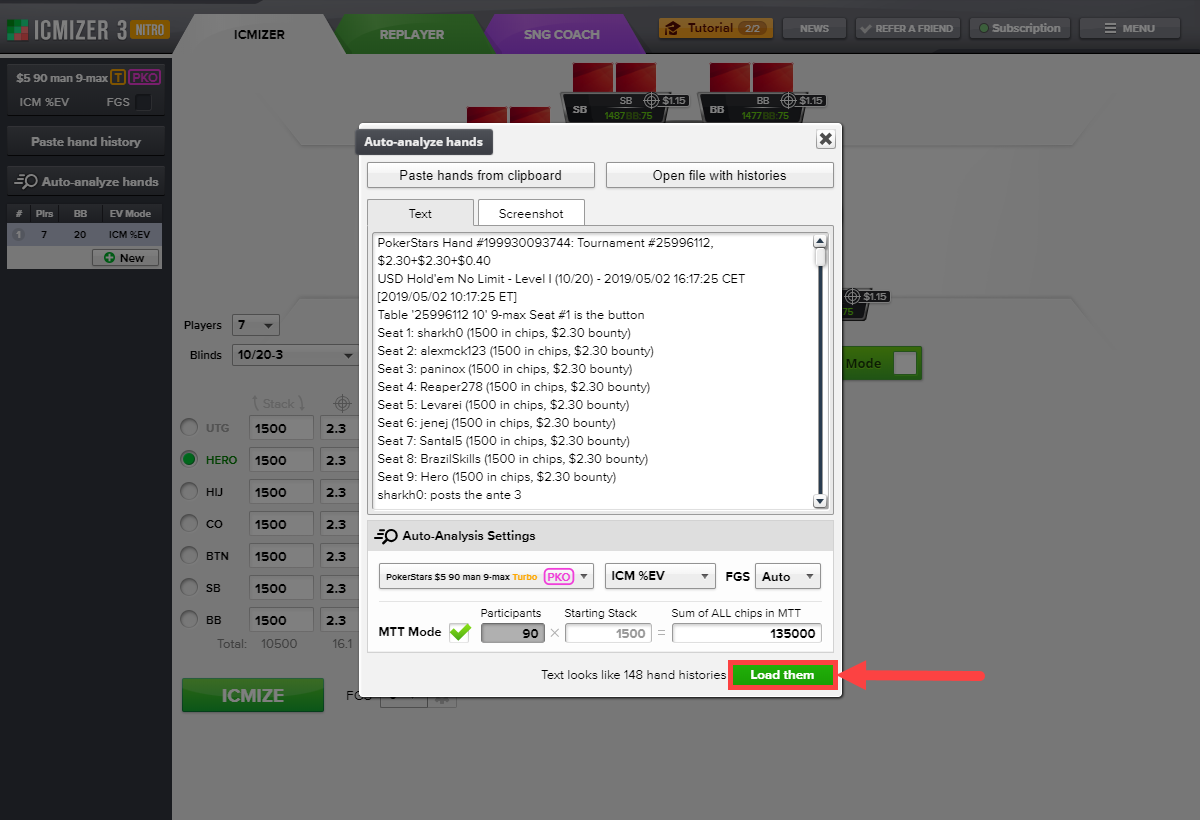 The loading of hands to the server will begin, and analysis then. The whole complex and time-consuming analysis process perform in the ICMIZER cloud without overloading your computer. Even multi table tournaments with thousands of players, ICMIZER 3 revises in seconds with the new, improved engine.

During the autoanalysis, you can watch the hands in the “Analysis” column without waiting for the end of processing. 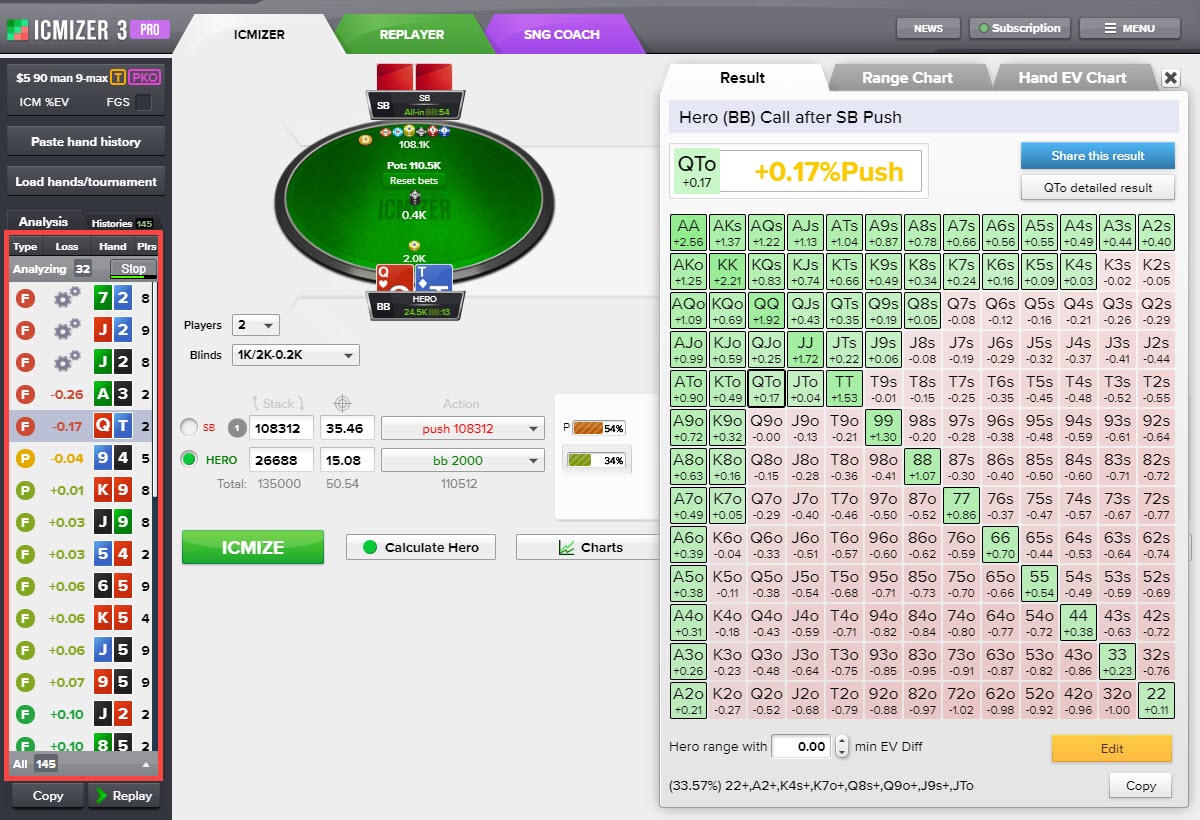 The “Histories” column contains all hands of the loaded tournament from the first to the last, the player’s cards, his position, and the number of players at the table. The column can be expanded by pressing the button: 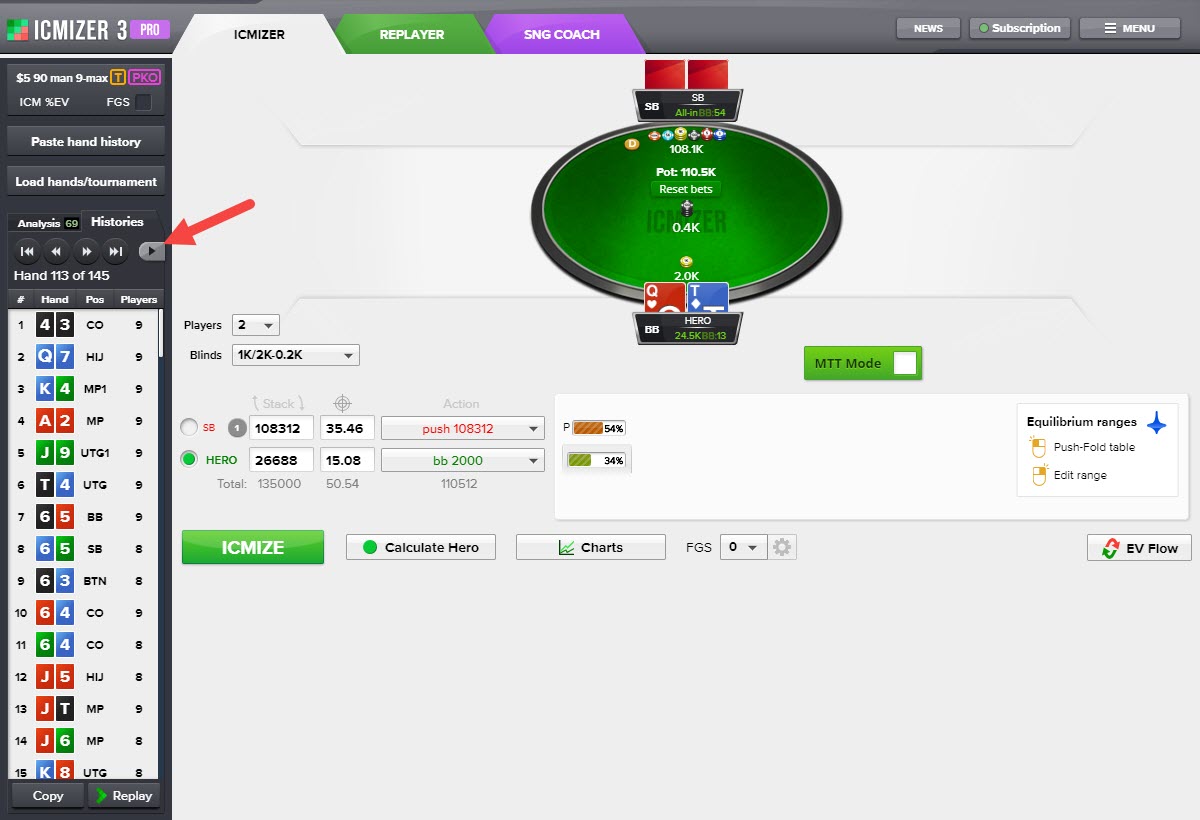 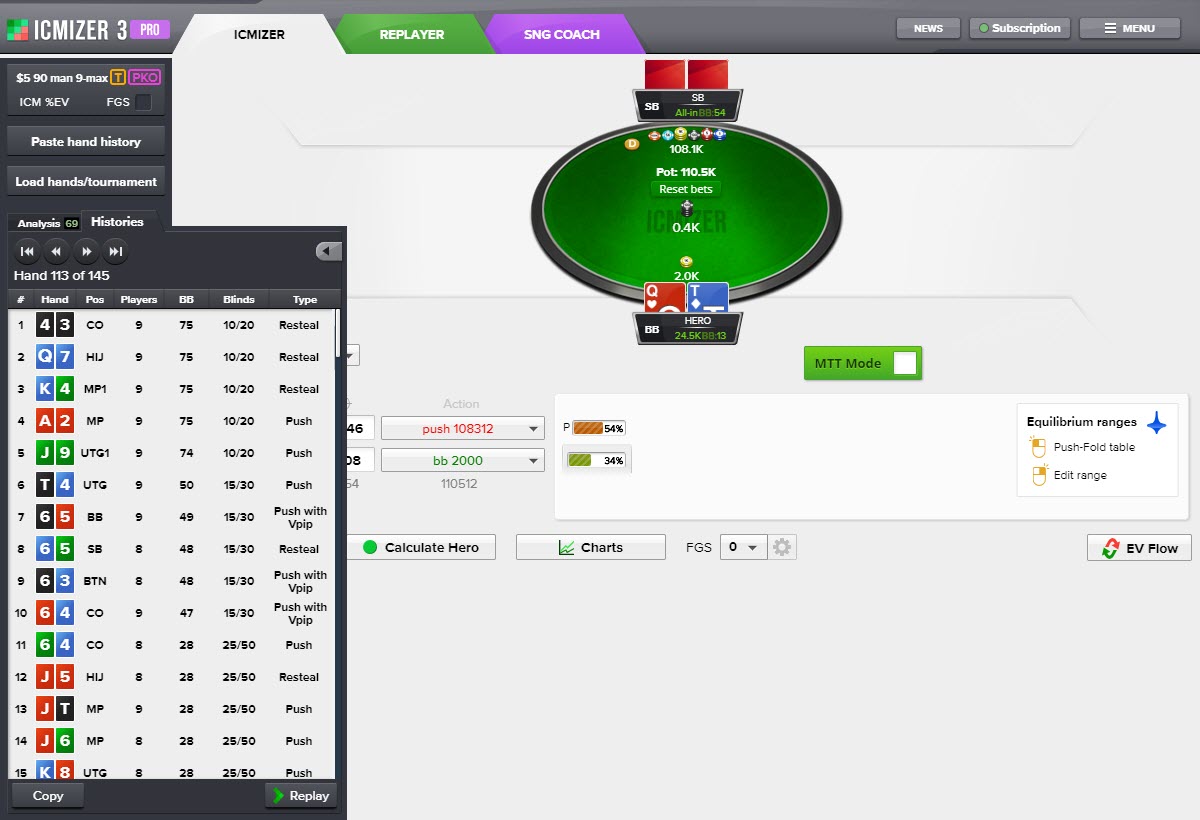 You can select any hand from the list and calculate it yourself by clicking the ICMIZE button.

How to work with the results of the autoanalysis?

Auto-analyzed hands are displayed in the “Analysis” column and sorted by the size of the mistake - the more expensive mistake the player made, the higher position in the column this hand would have. 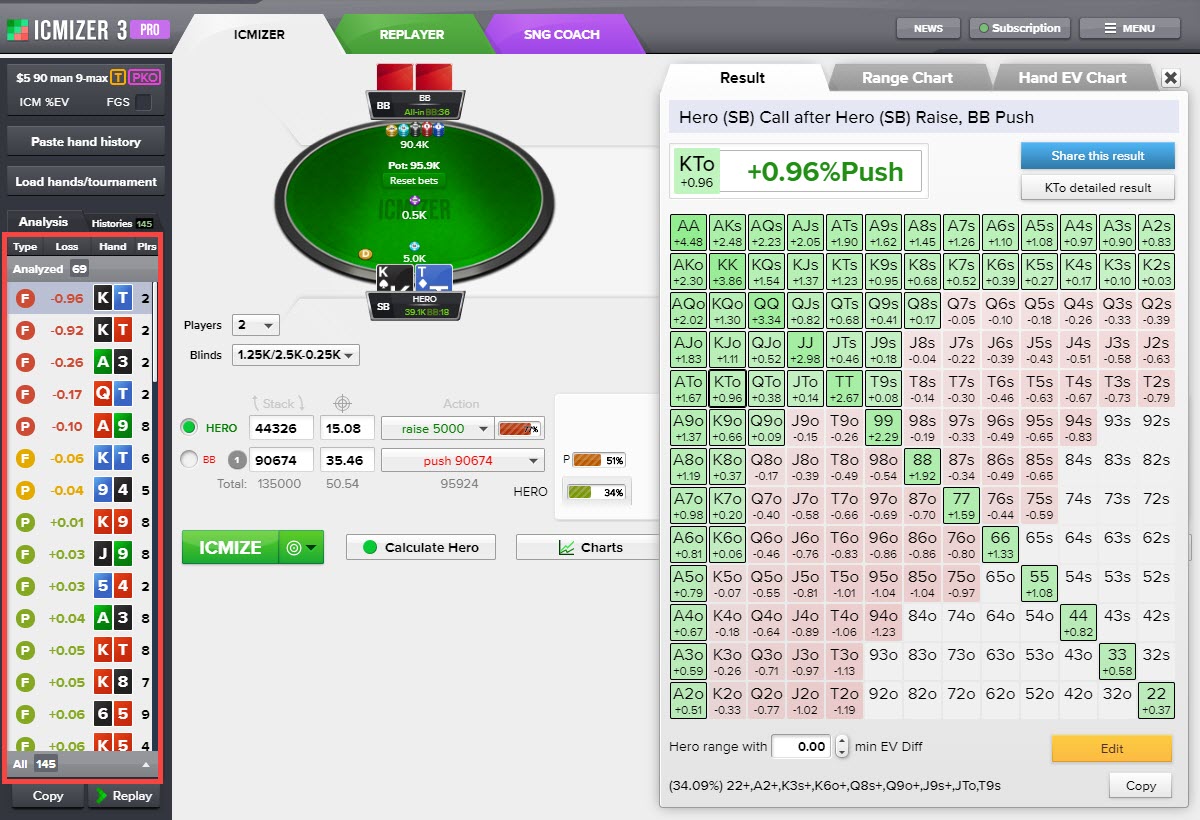 The following information is displayed in the “Analysis” tab:

Type - the action that the player made. There are four possible actions: P - push, C - call, O - overcall (when there was a push, a call, and the player made a call), F - fold.

Loss - the amount won or lost by the player as a result of his action. The measure of the Loss depends on the selected calculation mode:

ICM %EV - results are displayed as a percentage of the tournament prize pool.

Plrs - the number of players at the table. 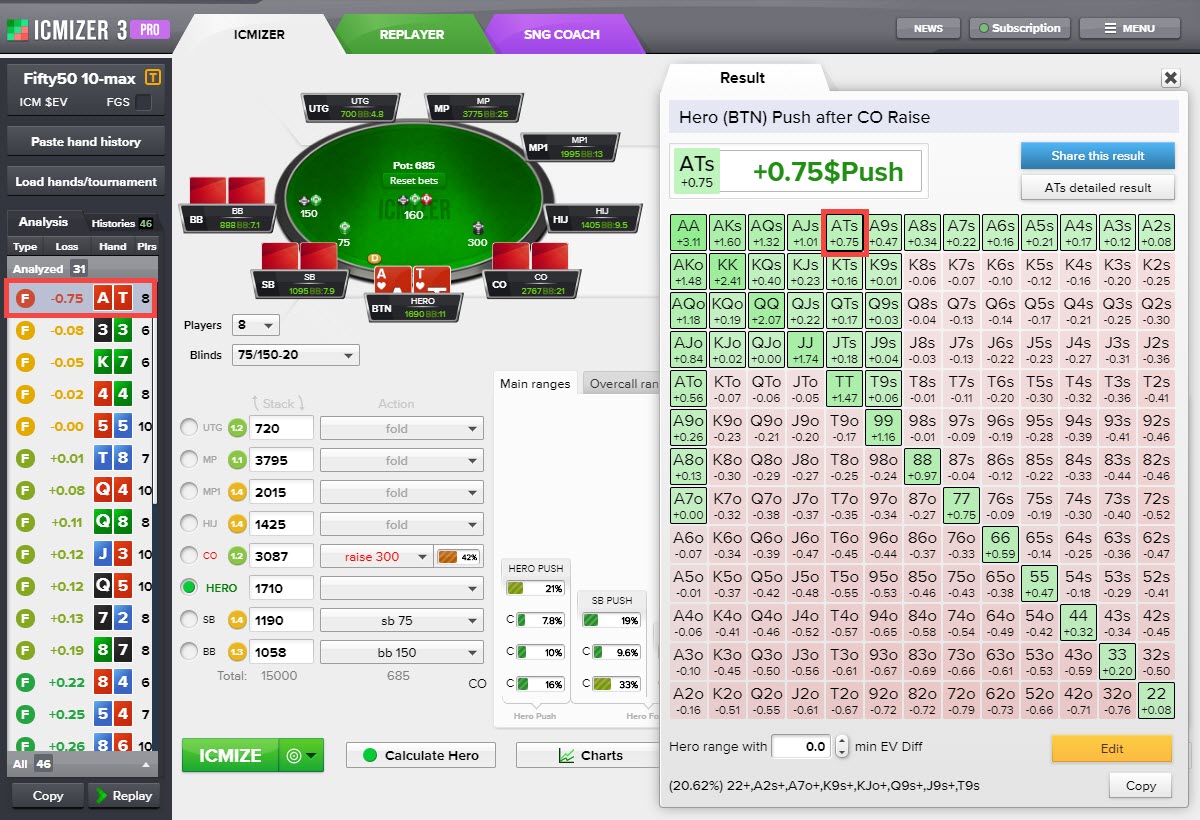 We can see that the player folded ATs, and so made a mistake that cost -0.75$. ICMIZER shows that here a Hero with a stack about 11 big blinds had to push facing a raise from an opponent on CO position. And, folded, he lost 0.75$. 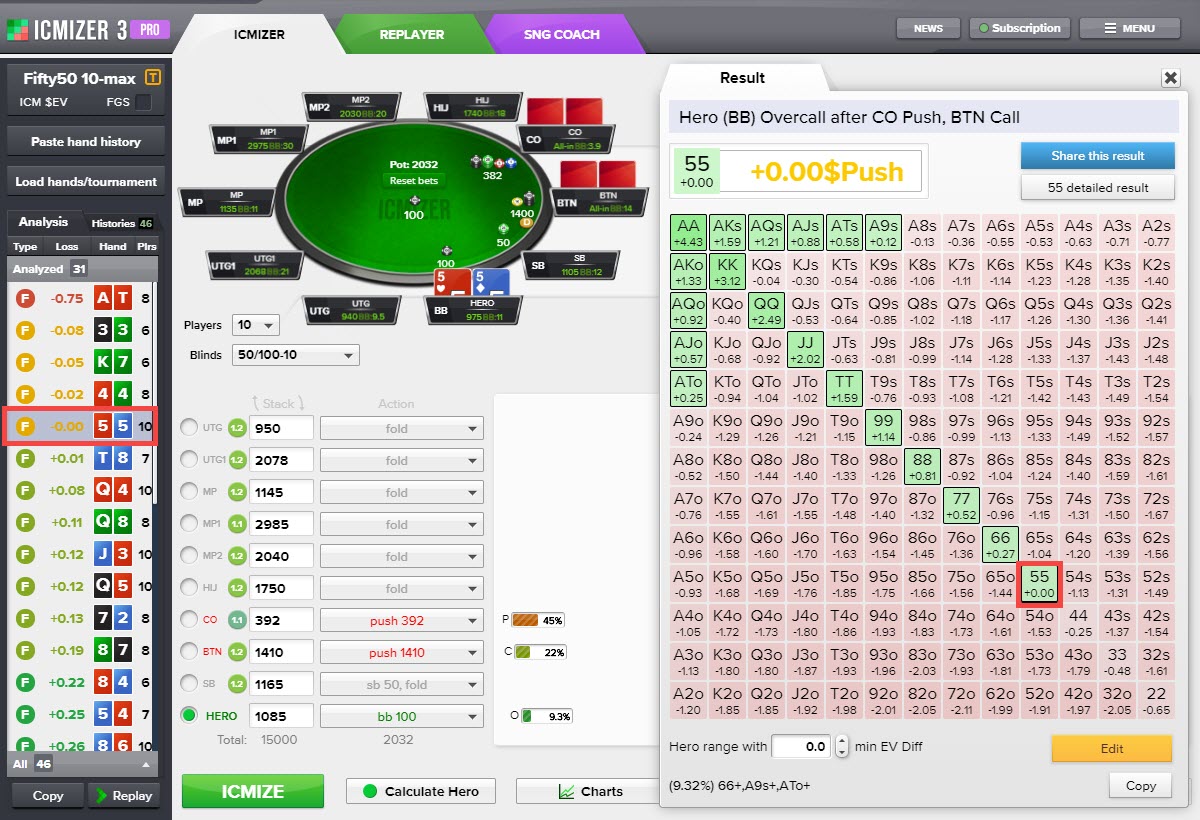 In this hand, a player with 55 folded when two opponents before him already shoved. The Loss close to zero means that the player’s action was neutral, i.e., that was not a mistake, just as calling a push would not be a mistake too. 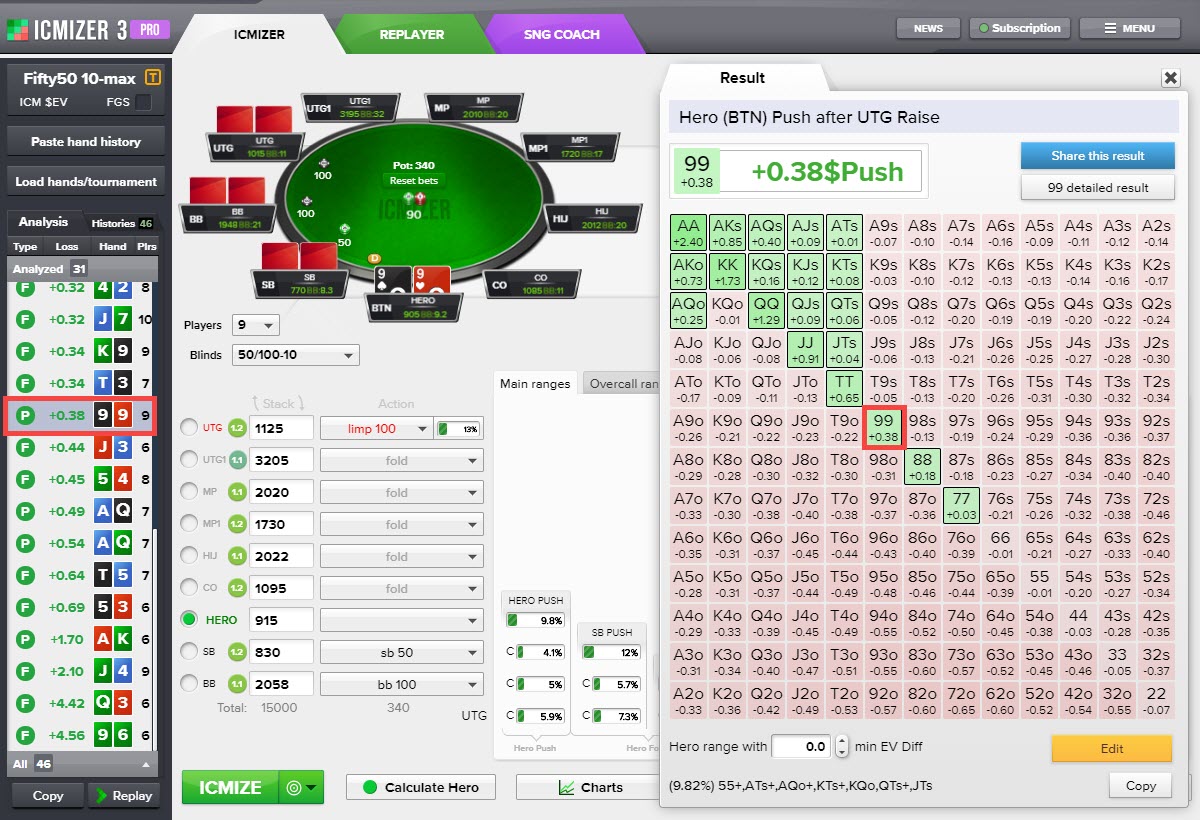 A Hero on the BTN with 99 pushed after limp from UTG. This action was correct, and he earned 0.95$.

If you are analyzing MTT, you must use the MTT mode. If this mode is not selected, ICMIZER calculates the hand as if the player at the SNG table or the MTT final table.

Select from the list the structure of the tournament that you want to figure out using the autoanalysis.

At the step of loading the tournament hand history file, it is needed to check the “MTT Mode” checkbox and input the total number of chips in the tournament in the “Sum of ALL chips in MTT” text box. 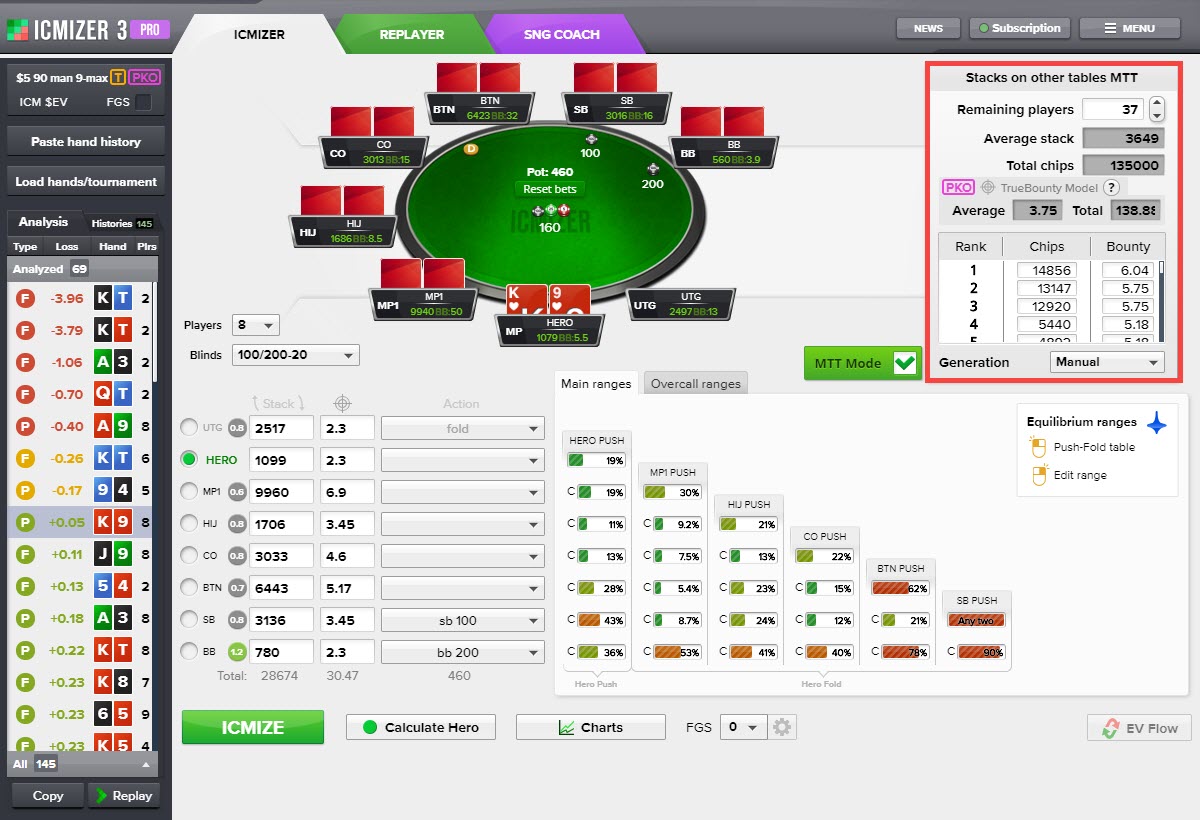 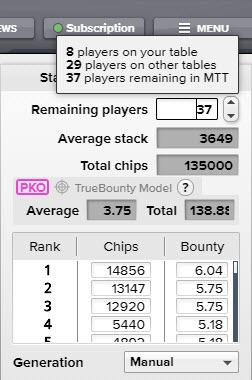