What is different though, is that once a Fifty50 tournament is complete, the remaining players get paid according to a much more complex payout formula. Below is the quote from the official page on PokerStars regarding this tournament's payout structure. 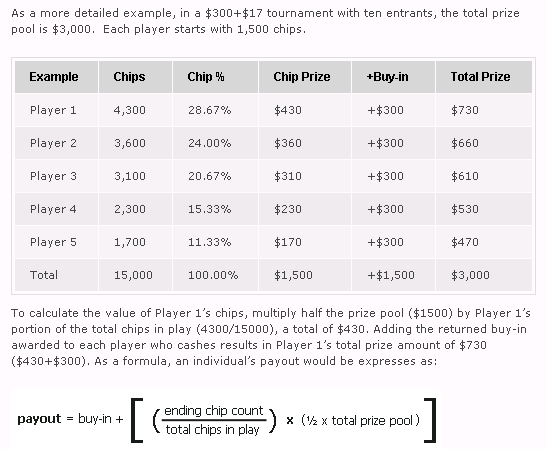 The payout formula looks really geeky. We can tell by examining it, that a finisher with a bigger stack will get paid more than someone with a very short stack. We can also see that there is a minimum payout, which is equal to the buy-in (excluding rake). So even if you have only 1 chip, you will still get you buy-in back, but the product of multiplication in the brackets will be very close to $0 for someone with 1 chip.

One of the most popular questions from players who play Fifty50 tournaments is the following:

Can an ICM calculator like ICMIZER help me with the analysis of hands in Fifty50 tournaments?

And the short answer is: “yes”!

ICMIZER has a special Fifty50 payout structure in the list of default payouts, which looks like the following:

Often when Fifty50 players first see this payout structure, they get confused. After all, it doesn’t really look like the formula above, so it raises some questions: Is that an accurate reflection of the Fifty50 payout structure? Is it precise, or is it an approximation of some sort?

The answer to those questions is usually surprising: it is the ideal and exact ICM (independent chip model) payout structure for Fifty50 tournaments, which will result in precisely the same payouts as the formula above will produce.

In fact, what is even more striking is that Fifty50 tournaments are paid out directly according to the ICM formula for nonzero chips stacks. This is different from the typical tournaments like SNGs or MTTs where only players with 0 chips (except for first place finisher) get paid with a fixed payout corresponding to their finish position.

One of the doubts about ICM and its applicability to tournament poker is that in typical tournaments like SNGs, ICM-based dollar evaluations of nonzero stacks are always performed with a certain error of an unknown magnitude. This is due to the theoretical nature of ICM-based formulas, which are used to convert a chip stack into its dollar value equivalent.

We accept that there may be imperfections with ICM in normal tournaments, but at this time (as of 2014), we simply haven’t found a better alternative to analyze poker tournaments. Since ICM has been around for years now and it has been heavily field-tested, it has gained trust and is recognized as the best model for chip / dollar EV stack conversions.

This is a rather difficult question. I will provide a mathematical proof below, but right now, let's simply check whether or not results are the same if we run an ICM calculation using this formula as compared to the results on the screenshot above. 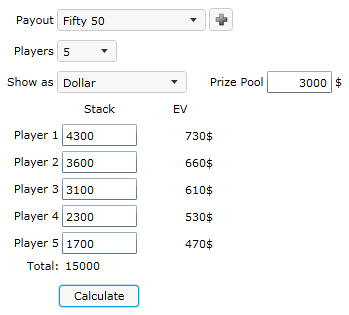 And voila – the numbers match completely. This, however, doesn’t explain why the formula works. Let's see why it does now.

First, let's look at the standard ICM formula, which allows us to convert chip stacks into their dollar equivalent.

So for the jth stack, ICM EV is equal to the sum of the products of the probabilities to finish in a certain place and a payout for finishing at that same place.

Now let's say that the tournament has two distinct payout structures and that payouts are made in order with both of them. We'll call them X payout and Y payout structures, which can have different numbers of places paid, etc.

We can see that:

Now let's have a good look at PokerStars' formula for Fifty50 tournaments:

We can see that an actual payout consists of two parts: the left part, which is equal to the buy-in, and the right part, which is a product of multiplication. The tournament ends when half of the players are eliminated, or when 5 out of the original 10 players remain.

We can see that the initial buy-in (which is 10% of the tournament prize pool) is the left part of the formula and is what we now call the X payout. According to X, each of the top 5 place finishers gets 10% of prize pool or buy-in.

Since our second payout Y only has a single first place payout, we can write a default ICM EV formula for Y in simplified form:

The payout for the first place is equal to half of the prize pool, and we can see that ICM EV Y is equal to the right part of the Fifty50 payout formula.

We can now say that the PokerStars Fifty50 formula is an equivalent of an ICM calculation according to a [60,10,10,10,10] payout structure, and that's why we can use that payout structure for the analysis of Fifty50 tournaments.